The gardens at Le Rivau are a decidedly privileged place for a romantic stroll or just to dream and walk about, but that is not all: contemporary art has also been given pride of place since 1999 in Le Rivau Gardens.

At the start of his tour, the visitor is invited to pick a honey sweet in the candy box entitled By my own desire (A mon seul désir). This work by Cécile Pitois was destined to the association of Le Rivau Castle’s Friends (l’Association des Amis du Château du Rivau) and financed by the Fondation de France, the Regional Council (Conseil régional du Centre) and the Association of Le Rivau Castle’s Friends itself.
But what is this sweet desire all about? If we believe the legend imagined by the artist, the visitor should throw the candy in the well found in the Secret Garden of the Castle, thereby entrusting a most personal secret to the lizard that haunts the bottom of the well.

A little further, Fabien Verschaere’s work Novel for life floats on the paddling pool, where characters of the magic world of childhood such as a teddy bear, a mascot duck and a beautiful princess, are enjoying the water. This work is typical of the artist’s figurative world, peopled with fantastic characters as well as ordinary objects, which are given equal merit. This allows the artist to reveal how magic can emerge from the triteness of everyday life. 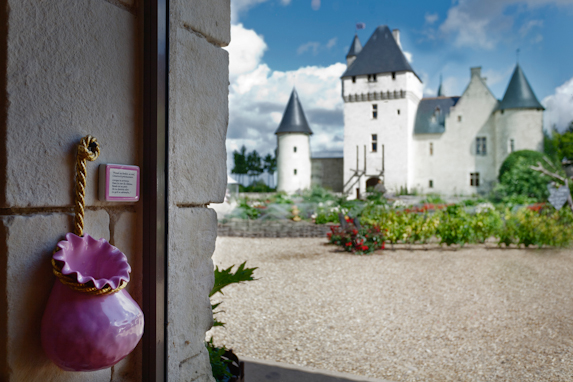 Céline Turpin celebrates the trees: she invites us to admire their beauty by adorning them with china necklaces. By offering these talismans to the trees, Céline Turpin draws our attention to their fundamental role in the park. These jewels are cheerful coquettish pieces of Land Art spread a wind of enchantment in the forest and highlight the beauty of the trees. Along the way, the visitor strolling by is suddenly turned into a voyeuristic spy as he discovers Nicole Tran Ba Vang’s spectacular sake cup. He is brought back to childhood, as he peeps through a keyhole to get a glimpse of what should remain secret. After the rain… (Après la pluie …, 2004) is Nicole Tran Ba Vang’s first sculpture, and a development in three dimensions of her work in photography, which deals with unveiling and hiding bodies.

His footsteps then lead the stroller to Lilian Bourgeat’s Remainder – boots (Invendus- bottes , 2008). He is astonished and perplexed by the huge pair of boots, especially since both are left feet. The boots as ordinary objects are transcended by their extra large size: as it is often the case with Lilian Bourgeat’s work, his “hyperrealistic” yet oversized objects question the limit between functionality and proportion.

The Garden Ship (Vaisseau de jardin ), also by Lilian Bourgeat, is a gigantic watering can, with its own peculiarities: its handle is upside down, its capacity is only five litres… This strange object seems to have undergone magical transformations, which draw attention to the limit between the world of magic and real life. 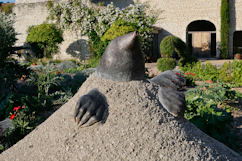 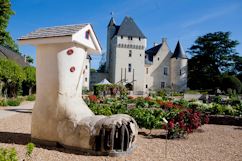 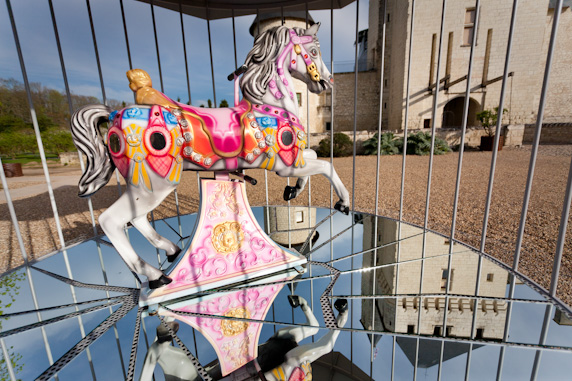 Encore et Toujours from Pierre Ardouvin outside the castle

Philippe Ramette, another wizard-artist, has adorned the eldest oak in the park with a customized Piercing (2002). It is striking how the object-sculpture at once stands out and integrates well into the park, and the mysterious alchemy between the sculpture and the old tree enhances them both.

As he walks further into the forest, the visitor gradually makes out five pairs of huge legs that seem to be running in the half-light: this is Basserode’s Running Forest (La forêt qui court, 1999). This fantastic, intriguing work is almost a curios: are these creatures walking trees or the products of a wild dream? Are these vegetal centaurs actually in motion? The sense of static urgency about them questions the evolution of the natural order.

After his journey in the worlds of childhood and magic, the stroller discovers Jean-Pierre Raynaud’s more conceptual and monumental Red Pot (Pot Rouge). The ordinary pot is magnified by its gigantic size and bright colour, while the visitor wanders why it is covered in concrete.