During the 15th Century, castles become theatrical places, where the Lord of the manor stages himself in the midst of his own favourite pastime: hunting. In the Great Hall, the works of today’s artists keep telling that story, and are confronted with other pieces that depict the medieval atmosphere.

Deer hanging The two brothers Alexandre and John Gailla did not hesitate to create a queerish trophy. They work together to produce animal sculptures made out of welded iron and glued-on nylon. They draw their inspiration from the age-old oppression and death toll that the human race imposes on animals, creating work that is powerful and evocative but never gruesome.

As a counterpoint, by the windows, the Panther and the Impala strike us with their theatrality and fragility. Artist Magali Vaillant borrowed from stately home interior decoration codes to adorn her Sitting-room Menagerie with gilded leather from Cordoba, creating a sacred-like aura about them.

On the easel, the two half-human half-animal silhouettes Two deers made out of cut-up paper by Ulla von Brandenburg seem to have escaped from a chinese shadow-puppetry show. They also evoke German legends from the romantic era in which stag-deers, the kigs of the forest, are a symbol of natural powers.

Legendary castles often remind us of the immemorial fight between the human race and the forses of the wilderness: deep forests and ferocious animals. Nadia Sabourin’s universe has a dreamlike quality. Snow red is all about innocence lost and reveals a dark, magical world, with its fairytale castle buried in the deep dark wood. These pieces of artwork have a lot say to those from Le Rivau’s permanent collection that look like hunting trophies, even though the contemporary artists who created them took many liberties with the traditional codes of the genre!

Karine Bonneval has a real fascination for forest creatures. Châsse chasse sucrée (Sweet Hunt), with its immaculate «forest» of roe deer antlers enshrined inside a glass cabinet like a secret treasure or a reliquary, is a good illustration of her devotion to the forces of wildlife.

Katia Bourdarel also revisit the image of the trophy. With the silver talons, the artist reveals the nobility which emanates from the winged race by adorning with silver a mysterious bird building up itself of himself(itself) from a consumed branch. Jeff Koons’works Rudolf the Red-Nosed Reindeer and Paddle Ball Game show the artist’s obsession with favourite childhood animals, while the Art Orienté objet duo Boar piece conveys the artists’ dislike of animal trophies: their boar head is not a taxidermy but a knitted creation! 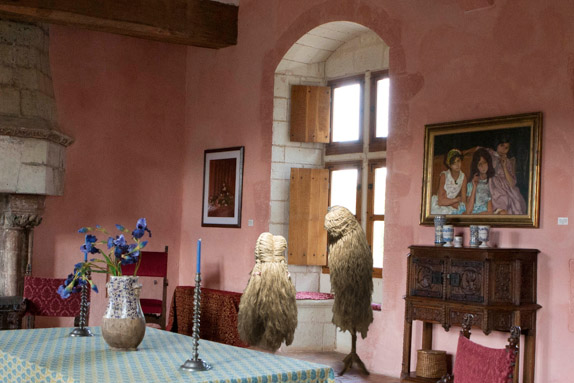